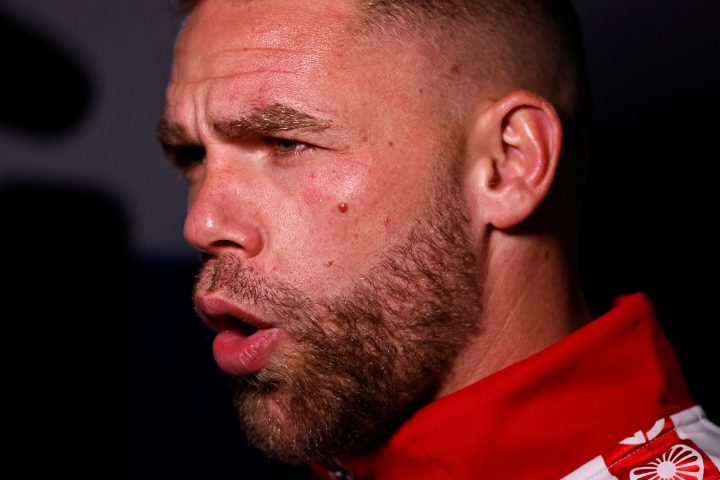 There appears to be some sort of rift between trainers Ben Davison and Mark Tibbs – with respect to Billy Joe Saunders’ stoppage loss at the hands of Saul ‘Canelo’ Alvarez.

Two weeks ago, Saunders was stopped in eight rounds in a three belt super middleweight unification at AT&T Stadium in Arlington, Texas.

During the eight, Saunders suffered a fractured orbital bone.

At the of the round, Saunders returned to the corner and advised his team that his vision was impaired in the right eye – and the fight was then stopped before the start of the ninth.

Davison was at one point the head trainer of Saunders, who eventually went in another direction and hired Tibbs.

For the fight with Canelo, both Tibbs and Davison were working the corner of Saunders – but Tibbs was still the head trainer and handled the training camp.

Tibbs recently took to social media to clarify the confusion over which trainer actually stopped the fight and who actually had the lead role in the corner.

“I just want to clarify one or two things – Ben Davison was not in our training camp,” Tibbs said on Twitter.

“We saw him in the last week whilst we were winding down, I saw him on the morning of the fight in the hotel room.

“Onto the fight, during the round that Billy Joe got injured I brief my corner team that Billy’s eye had got injured. I got a towel from one of them incase I needed it. As Billy Joe walked towards me at the end of the round I looked into his eyes, we had a little bit of dialogue, but it was between us.

“He sits down, as he sits down in the corner Ben Davidson got control and blew down his earhole. I let him have his 20 seconds because I knew what I was about to do on the state of the eye. So as he sat down I had some more dialogue with him, that’s private, I turned round and waved the fight off as Billy Joe’s trainer and head coach. It is as simple as that. Billy Joe needed looking after and it was my job to do that.”

Some of those statements did not sit well with Davison, who took to social media to issue a response of his own.

“Just to clarify a few things. I was approached by BJS as soon as the fight was made who came down to my gym to discuss and go over the fight, which Mark knows. I was then also asked and approached to do some sessions with him when landed in Vegas for Josh Taylor’s fight,” Davison stated on social media.

” I was then also asked to assist in the corner on the night, which I obliged. To conclude the above, the fighter clearly values my input. The fighter himself can confirm all of the above. In the corner I was often asked for my input from Mark by the way of ‘Ben? What do you think?’ Or other similar things said which is why at times I was vocal.

“During the last interactions in the corner, in my opinion the reason BJS put in his statement, which to be clear was HIS statement, that came from HIM, Which HE says I was the one who got the corner to pull the fight was because he feels there was hesitancy from Mark about stopping the fight which was shown when he said ‘I’m giving you 1 more round’ – which as a friend and as a coach wasn’t an option considering the extent of the injury. Of course in the end Mark waved it off. But before that I felt in that situation someone needed to get a grip of the situation, which is why I whispered in his ear, and from BJS’ statement it seems HE feels that came from myself – His words, not mine.

“There is no glory in who made the call or whatever nonsense this is all over, it was a loss. It’s extremely unprofessional the way this has been handled, I must be honest and I expected this had the fight not gone to plan, however I felt the occasion was bigger than a selfish decision to not be there for BJS, so I decided to go, AS ASKED.

“All of the above and anything in a previous interview with IFL, can and I’m sure will be confirmed by the fighter, the cutman and the 4th assistant in the corner. It shouldn’t come to this as it’s not about me or Mark but I have been put in a situation where my professionalism was made questionable by an unprofessional social media post and anybody that knows me knows that I pride myself on my professionalism and dedication. therefore clarity is needed. There is the details and as I said I’m sure the fighter will clear everything up in due course. I have Josh Taylor undisputed fight week coming up and I have to be professional and focus on that. I just wanted to clear a few things up. Thank you.”