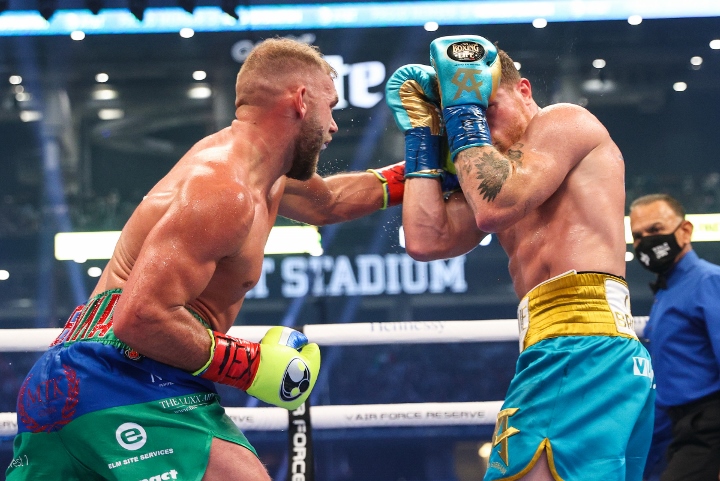 Josh Taylor was impressed by Billy Joe Saunders’ performance in his career-defining fight against Canelo Alvarez.

The unbeaten IBF/WBA 140-pound champion had their super middleweight title unification fight even through eight rounds. Though that high-profile fight ended in disappointment for Saunders on May 8, Taylor thinks the British southpaw proved himself at boxing’s elite level versus the fighter most commonly considered number one, pound-for-pound, in the sport.

“Billy Joe, I thought was ducking down in that same fight often and obviously Canelo figured that out and he caught him with a monster shot. And obviously, you’ve seen all the damage he’s had done to his face. There’s no way, absolutely no way that he could’ve continued with that. He’d be risking his health, his life, if he had continued with an injury like that.”

Judges Tim Cheatham (77-75), Max De Luca (78-74) and Glenn Feldman (78-74) all had Alvarez ahead through eight rounds at AT&T Stadium in Arlington, Texas. Saunders didn’t answer the bell for the ninth round because his trainer, Mark Tibbs, determined he shouldn’t continue with what was diagnosed as multiple fractures to the orbital bone around his right eye.

Saunders was criticized in the immediate aftermath of his loss to Alvarez because he disparaged Daniel Dubois for not continuing due to his own eye injury against heavyweight contender Joe Joyce. Despite what he said about Dubois, Taylor emphasized that it was too dangerous for Saunders (31-1, 14 KOs) to continue against Alvarez (56-1-2, 38 KOs) with that type of injury.

“Listen, it is what it is,” Taylor said. “But that injury, I mean he had four cracks in his bone. Basically, his eyeball was resting on his cheekbone, you know? His eyeball was hanging out essentially – you know, it was four cracks and four plates – a pretty horrific injury. So, there’s no way … maybe Billy Joe would’ve went back out, you know? His corner pulled him out the end of the day. It wasn’t him that says, ‘No, I don’t want to fight no more.’ His corner pulled him out end of the day. … I know Mark Tibbs made the decision not to go back out, which was the right decision.

“Billy Joe, I thought he proved that he’s at that level. He wasn’t out of his depth. It was a very competitive fight. I had the fight level. So, he didn’t have to go and prove his bravery, you know? If he had went out again after getting an injury like that, and then he got hit in the eye again, it could’ve blinded him. He could’ve lost his vision and things like that. You know, so he had proved that he’s world class, proved that he belongs at that level. So, I think it was the right decision.”

The 30-year-old Taylor (17-0, 13 KOs), of Prestonpans, Scotland, and Ramirez (26-0, 17 KOs), of Avenal, California, will fight for Taylor’s two 140-pound titles and Ramirez’s WBC and WBO belts at Virgin Hotels Las Vegas. ESPN will televise their full title unification fight as the main event of a three-bout broadcast scheduled to start at 10 p.m. EDT.