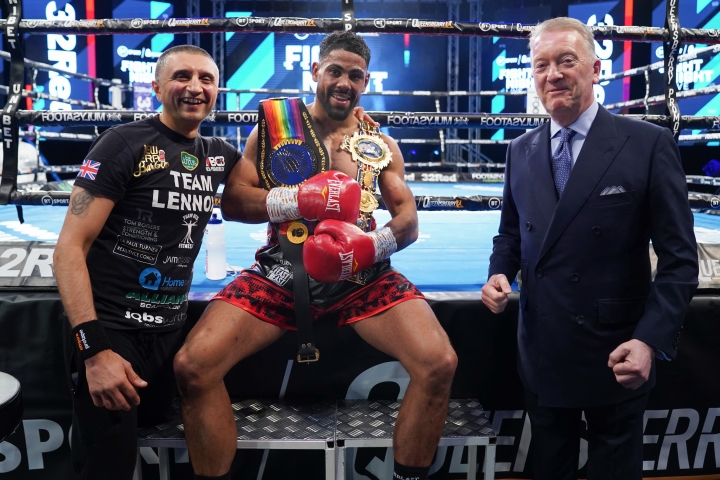 LENNOX CLARKE has vowed to “iron out” Lerrone Richards and doesn’t even want paying for their rematch.

The Halesowen roughhouse suffered his only defeat in 22 fights when he dropped a split decision against Richards, who Clarke challenged for the British and Commonwealth Super-Middleweight titles in November 2019.

Clarke won those titles at the second attempt in March after they became vacant when he knocked out Willy Hutchinson inside five rounds.

“I will give Lerrone my purse to get in the ring with him again. I’d fight him for free because I know what I will do to him,” snapped the punching car mechanic.

“It was a fight I had to take and a chance I took, but I fell short. I have the beating of Lerrone. I’ll knock him out next time.

“I have spoken more about Lerrone than Willy because it is a bitter pill. I want to iron him out.”

“I have always had belief in myself and even more so when I lost to Lerrone. I only had one hand when I boxed him.

“At the time he was touted to be a top prospect. I gave him hell for 12 rounds and was handicapped so I got confidence from that.

“I took the chance and I had really good feedback from David Haye and Richie Woodhall who were there.

“They both messaged me afterwards and said they had become fans and thought I nicked the fight.

“It’s horses for courses. One judge favoured me and the other judges favoured him.”

Clarke damaged his right shoulder before the fight and admits he was close to pulling out hours before the closely fought contest against Richards.

Lennox revealed: “I was going pull out of that fight on the day. I was having a cortisone injection in my right shoulder three hours before the fight.

“I wasn’t able to use my right hand because of the pain. I was the mandatory challenger and if I pulled out I might not have got a chance again.

“After that fight I had rehab on my shoulder for eight months, but I knew afterwards that I was British title level and more.”

Clarke’s upset win against Hutchinson followed a 16-month layoff caused by his injury and shortage of promotions to box on during the pandemic.

Even when he stepped in the ring to face the fancied Scot Hutchinson, Clarke still doubted his right hand.

Clarke, 29, explained: “The sweetest thing for me was hitting Willy with the right hand because that was my injured shoulder and I have had a mental block.

“I’ve been using it in training, but I never let it go. I let it go that night and Willy was gone. The physios told me to use it and Errol Johnson kept telling me to let it go in the corner.

“I hadn’t thrown it with bad intentions, but it worked against Willy.”